Today on Bear Nerd, we have a more-than-special EXCLUSIVE interview with Greg Pak, the awesome writer of many titles such as Marvel Comics’ Hulk, Incredible Hercules, Alpha Flight and X-Treme X-Men! In this interview he talks about his ideas for the series, the Howlett/Hercules couple, fan reactions and the future.

BN- Let’s start with “Exalted”. We were all very pleasantly surprised with that arc. We had alternate realities, mohawk-Storm (BIG fans here), a younger Nightcrawler and Cyclops and Wolvrine (I mean, Howlett) working together. How did you come up with that particular set up? Did you always intend for those characters’ story to develop into a new title? How did the transition from the Exalted story arc to the monthly X-Treme X-Men go?

When X-Men editor Nick Lowe and I first started talking about using alternate-reality X-Men in my “Astonishing X-Men” run, he mentioned the possibility of doing something more with this new team we were creating. And a few months later, we were underway with the “X-Treme” book!

The biggest challenge in making the transition from the Astonishing story and the “X-Treme” book was figuring out how to set the stage in a way that wouldn’t overwhelm brand new readers — we had characters from five different realities, after all. So we took our time establishing our central heroine, Dazzler, in “our” universe, which I think helped ground the story. And we had an advantage in that most of our alternative characters were pretty recognizable versions of very well known X-Men.

Still, one technique I’ve embraced is just to be as upfront as possible as early as possible in each issue about exactly what’s going on. Captions identify the characters when they appear and at some point in the first couple of pages, I try to be sure someone says what their current mission is in very clear terms. The crazier the story is, the more important it is to help the reader get comfortable.

BN – Let’s talk about James Howlett. How did you get the idea to take an established icon like Wolverine and write a gay version of him? And having him be romantically involved (apparently) with Hercules? Did you get a lot of reactions from the fans, or the LGBT community? Any negative backlash?

The idea to establish Howlett as a gay man came to me while I was wrapping up the “Astonishing” run and preparing for “X-Treme.” I hadn’t seen a gay character in mainstream comics quite like Howlett before, and particularly when you’re doing an alternate reality book, why the heck not go for it? Hercules was the perfect character to pull in as his romantic interest because we’d already hinted that Howlett had some dealings with the mystic/divine (in “Astonishing,” he mentions that he was Her Majesty’s Envoy to Shangri-La). And of course when I was writing “Incredible Hercules” with Fred Van Lente, we’d followed the actual Greek myths and hinted at Hercules’s occasional same-sex encounters.

I love Howlett and Hercules as a couple. The balance each other beautifully — with Howlett as more reticent or even shy and Herc so exuberant and larger-than-life.

BN – Did you get a lot of reactions from the fans, or the LGBT community? Any negative backlash?

We didn’t make a big deal out of the reveal — we just let the fans discover it. And it’s been a total blast. I’ve gotten so many nice tweets about them from fans who love them as much as I do. And a few fans have been drawing their own Herculeses and Howletts, which are adorable (but occasionally not safe for work, so be careful if you’re googling). The whole thing’s been a ton of fun and I’m hugely grateful to the fans who have embraced these characters.

I haven’t seen any negative backlash at all — just a lot of love, which is what the characters are all about, after all.

BN – I think we could say that the Howlett/Hercules couple is the first bear couple in mainstream super-hero comics, showing two hardcore heroes on the mature side of the age spectrum. Was that approach intentional? Were you aware of the bear community or bear culture? How much can we expect to see their relationship explored?

I was familiar with the term “bear,” but didn’t really think about it as I was writing the characters. These were both characters that I’d worked with a great deal over the years in one reality or another, and they just seemed meant for each other. I do always like breaking stereotypes, though, and I suppose part of the attraction of writing this particular pair is that they’re definitely different from most couples in comics, gay or straight.

BN – Speaking of that, you have quite a lot of experience with Hercules, having written him in a lot of comics over the last few years. How does that influence you (if it does at all) on THIS particular version of the character? Do you have a particular fondness for this character?

I love Hercules. Love love love him. He’s a fantastically fun character to write, I think because he has this fundamental decency combined with almost zero impulse control. He just goes out there and does what he does, lays it all on the line, with great, good-hearted, self-deprecating humor. I think most of us probably wish we could be a little more like that.

And he has a beard. More beards in comics are always a good thing. 😉

BN – We know that A Hercules shows up in issue #9, and we know from the cover of issue #12 that he’s going to be a part of the team (we’re crossing our fingers here for him to be THE Hercules).

Yep, Herc’s a big part of the team now. We needed a powerhouse, didn’t we? Sometimes you can look at the silhouettes of a team and get a feel for how well it’s all working. And Herc has a silhouette the team definitely needed.

BN – Given the liberty we assume the alternate realities afford you, who else can we expect to join the team?

I love that group shot Kalman drew for that issue #12 cover, too, and I’m actually thinking the team’s reached its correct size now.

BN – We know there’s a crossover coming up, with Astonishing X-Men and Age of Apocalypse. What can you tell us about this story?

It’s called “X-termination,” and it’s a huge, dangerous, multiverse-threatening story that starts with some trouble-making by Age of Apocalypse Nightcrawler. It’s been a blast putting it together with Marjorie Liu, the writer of “Astonishing,” and David Lapham, the writer of “Age of Apocalypse.” The X-Treme team’s in for some huge challenges and our characters’ big emotional stories will hit their climaxes, so dontcha dare miss it!

BN – Finally, thank you SO MUCH for taking the time to talk to us, Mr. Pak, we feel honored. The floor is yours now, any other projects you’d like to talk about? Any message for your fans from Brazil?

Thanks so much to you guys! If anyone has an iPad, please check out my “Vision Machine” graphic novel iPad app, which is a big sci fi story featuring a full voice and music soundtrack, animation, and a ton of interactive extras. Pencils for the original book are by the brilliant Brazilian artist RB Silva. Check it out here: http://bit.ly/visionmachine

I have a bunch more big projects coming down the line – please feel free to follow me on Twitter at http://twitter.com/gregpak and check out my website http://www.gregpak.com for the latest!

And thanks so much to everyone who’s been reading my stuff. You guys make all this crazy stuff possible, and I love ya. 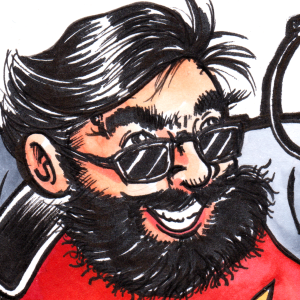