Big, furry, pale, sensitive, a lover of rock and felines – To many, the perfect bear! But because it’s too good to be true, all this perfection exists only as the title character in the american comic book Wuvable Oaf, written and illustrated by the talented and genial Ed Luce.

Originally from Liverpool, New York, now a San Francisco resident, comic book creator Ed Luce has a long story as a collector of mainstream comics. However, his underground art style made him choose the independent market as the birth place of his creation.

Wuvable Oaf is a comic that mixes many aspects of north-american gay culture, but under a nerd perspective. And not just comic-book nerd! Oaf has a strong musical component, apparent on the scripts and on the shirts that portray the creator’s favourite rock bands, from punk rock to death metal. You could call it a “gay Scott Pilgrim” for easy reference, but it’s better to just read it instead of label it.

The story takes place in San Francisco and tells the attempts of solitary Oaf , always on the lookout for his perfect partner, to meet his newest muse, frontman for the Ejaculoids, Atilla – A very eligible otter in the city’s Queer Scene. Sounds simple enough, but Wuvable Oaf is a comic full of bizarre idiosyncrasies, mysterious sub-plots, well-rounded characters and tons of pop culture references. Oaf himself is a bear with remarkable physical strenght and the ability to grow his body hair at will. He also has a secret identity, Goteblüd, who’s a pro wrestler, another one of his creator’s passions.

BN – What comics would you say were an influence for your career as a comic book creator?

I have been a lifelong comics collector, mostly of superhero books by DC and Marvel. However, growing up I could never draw with that kind of realism, so I didn’t consider comics a field I could go into. It wasn’t until my late 20’s when I discovered indie comics and saw artists who drew in a style similar to mine. I was an early fan of the Hernandez Brothers (particularly Gilberto). As I began to conceptualize the Oaf comic, I was inspired by Osamu Tezuka, Dave Sim’s Cerebus (although I can’t stand the stories), Bryan Lee O’Malley and Chuck BB’s work on Black Metal.

BN – Was it hard to, and if it was, what were the dificulties in publishing a gay comic book on USA?

I really started to believe I could do a queer-themed comic after meeting the people behind Prism Comics. Prism is a non-profit organization that supports LGBT creators and offers a publishing grant once a year to help emerging artists. When I saw there was an audience for these types of characters and subject matter, I felt like the Oaf could have a place out there too.

The hardest thing about publishing an indie comic is finding ways to get it to readers. Without Diamond Distributor, I have had to use the internet and conventions to get the word out. Social networking sites have been an invaluable resource and many blog sites have carried reviews or podcasts about my work.

I think another consideration I had when creating the Oaf was what type of audience I wanted. It was important for me to create a gay character that reflects my own ideas and sensibilities but I also wanted to be able to share his story with heterosexual men and women. Early on, I decided not to use terms like ‘bear’, ‘gay’ or even ‘queer’ in the the dialogue. I thought it was very obvious what was going on with the characters’ sexualities and that there was no need to label them. This has allowed the book to be discovered by people of all persuasions and made my audience much larger. In fact, at some conventions, there are equal numbers of gay and straight people who buy my work.

BN – Wuvable Oaf is a very musical book. What bands or musician you hear while drawing and inking?

Good question! I would say The Smiths and Morrissey were very early inspirations on the Oaf’s personality. I was also listening alot to the Wipers, The Hidden Cameras, Pete Shelley and Magnetic Fields. Many of these musicians have been referenced in the comic.

I am also a big fan of metal music, in all its various forms. In fact, my love of this genre led me to create the Goteblud character, who is a black metal themed wrestler!

BN – And finally, Do you have something to say to your soon to be readers from Brazil? Well, the Oaf already have some fans around here, and sure there’ll be more to come!

I hope the Oaf is able to find his way into the hearts of readers in Brazil the same way he has in the United States. Who knows, one day I might end up sending him to Brazil in one of my stories…he could certainly use some rest…and sun! 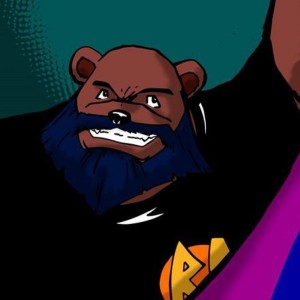