BN Interview – Bruin, Bear With Me

Today we bring you a very special interview with  Tim “Bruin” Vanderburg, creator of the webcomic Bear With Me (we’ve profiled the series before here).

BWM has just surpassed the 500 strips mark and, after a long hiatus, we’ll be again featuring the strip here at Bear Nerd, in Portuguese. To celebrate, we got caught up with Bruin in a really nice interview, check it out!

BN – Recently, Bear With Me hit the 500 strips mark. What has changed? How’s the audience reception?

The changes from BWM #1 to BWM#500 have been dramatic.  The first strips were hand drawn and hand lettered.  They were pretty raw, and hard to read.  The first change was to digitize the lettering.  It wasn’t until BWM#7 that color entered the scene.  Still, the strips were hand penciled, then the pencilling was redone with a Flair pen, then colored using colored pencils.  The drawings were then scanned into my PC, where the lettering was added. It was labor-intensive.  Things didn’t go digital until #198, which corresponded to the first weekend of 2007.  As you might guess, I had gotten digital drawing hardware and software for Christmas a week or so earlier.

Readers have remarked several times on how the strip has “evolved”.  At first, I discounted this, but looking back, I can see how my skills have improved, even as I flinch at some of the hackneyed scripting.

BN – What are your personal favourite moments throughout the series? Any event/character that you would have done differently, looking back?

It may seem maudlin, but Paul’s near-death experience, especially seeing his mother, still moves me incredibly when I go back and read it.  I know this stems from the loss of my own mother, and how much I still miss her.  So, that was my little tribute to her.  Beyond that, any strip that affirms the bonds between characters rank up there.

BN – We just had the introduction of a deaf character, Frank. How did you come up with him?

Frank was a long time coming, but his roots go back to my college days, when I was majoring in Speech and Hearing.  I had learned American Sign Language (ASL) as an undergrad, because I had a young Deaf woman in my caseload.  I had become fluent enough to act as an ad hoc interpreter for the local courts in a couple of cases, although I was never proficient enough to become a Certified Interpreter.  ASL is (as is, I’m sure, Signed Portuguese) a visually beautiful and expressive language, which has stayed with me, to some degree ever since.  I simply needed a way to work a Deaf character in, as well as devise a way to transfer a language based on movement onto a static medium.  I’ve sought out the advice of Deaf bloggers to make sure Frank comes across as a fully-realized, independent character that is neither dependant on the Hearing to get by, nor so idealized that he is unapproachable.

BN – Do you follow other strips aimed at the bear adience (or gay audience, in general)?

I adore Tim Barela’s “Leonard & Larry”! The detail of his work is phenomenal, and his scripting would easily transfer to a TV sit-com.  I currently follow “Blur the Lines”, Bob Kusiak’s webcomic, and had been following “My Viking Zombie Boyfriend” by Jeremy Rizza and “Becoming Blizzard”, by Rondall Carson, but their output has been sporadic lately.  Another webcomic that deserves mention is “*Breakfast Included”, by John Adams and William Brown.  While they appear to have gone on an extended hiatus, you can still access the archives.  The artwork is decidedly high-tech and the witty banter is priceless.

BN – You said in your first interview with us that the comic had “taken off your chest” a lot of disappointments with the “bear scene” and its standards of what it means/doesn’t mean to be a bear. Has anything changed about it? Are the “new bears” more open minded?

If anything has changed, it’s been my perspective.  The entire “Bear Fair” story line came out of a period of disenchantment with the Bear community as I discovered that the Bear Runs had devolved into sexual free-for-alls.  Chicago’s Bear Pride suffered as a result, as local downtown hotels refused to play host to the national gathering.  Pride cleaned up its act, and the event is thriving again, but it went through a rough number of years, repairing its reputation. So, in that regard, I think the Bear Community grew up.  I’d like to think that the entire question of “Who is / isn’t a Bear” is much less an issue now.  There’s so much variety out there, that if you look hard enough, you’ll find your niche.

BN – What can we expect in the comic from now on??

I wish I had a snappy, prepared answer to that question! I think the future of BWM is limited only by my imagination and willingness to try new (Meaning “new to me”) digital drawing techniques, exploring new story lines and paths for the boys to take. I’m toying with where the relationship between Mo and Peter might lead; should the localMetropolitan Church be expanded? Will Latinos and African-Americans be introduced as characters? And my favorite soap opera question: …And what about…Monique?

I don’t have answers, yet; if I can connect enough related episodes together, as when Andy and Paul shopped for an apartment, a story arc develops. If I can create more and more related episodes, the richer, more detailed the story becomes.

BN – Are there plans for a print edition of the series? I personally think BWM would make a great ainmation!

A BWM book? The short answer is, “No”. It’s not for lack of material, it’s due to lack of motivation on my part, and I am very lazy. There’s looking up a publisher, a printer, getting a contract written, which involves a lawyer; and then, God help me!. there’s the promotional tours, which I would utterly dread. I’m a lousy salesman, and have no confidence in my social skills; is it any wonder I work on BWM out of my own house?

I’m told BWM would make a good animated sit com, but like a book, you need contracts, an animation studio, lawyers, agents, vocal talent… It’s too much!

BN – Just like BWM talks about the obstacles and troubles of the bear universe, as well as homophobia in a more general sense, other strips made by LGBT artists shne some light on what happens with the “other letters” of the spectrum – Like Sasha, the maned lioness, by trans creator Samie Carvalho (http://sashalioness.tumblr.com/). Do you thik art, even in a context like a webcomic, can help raise awareness about the issues of minorities??

I think it’s important to get our stories out there through as many media as possible.  The most touching emails I’ve received concerning BWM come from guys, young and old, who are in the early stages of coming out, finding themselves affirmed and encouraged through my ridiculous drawings.  That’s powerful.  I’m a member of a Gay men’s chorus here inMadison.  Our musical director, and other members of the chorus, have been approached by audience members telling us that we were the first group of Gay men they had ever encountered, and that their preconceptions were challenged and often blown away because of our performances. So, yes; art, be it in the form of webcomics, music, theatre, dance, has the power to reach and change people…or at least make them think.  When I started “Bear With Me”, I had two goals:  Make ‘em laugh; make ‘em think.  The idea that I have given people strength, encouragement and even hope blows me away.

BN – As BWM progresses, we find out that Andy is rich. Then, we find out he’s filthy rich. There’s even some talk about him being a Log Cabin Republican, something that probably wouldnt go over very well with mor emilitant LGBT readers. Did you ever worry that those are traits that might hinder the audience’s identification with him?

With his vast wealth, Andy could easily become an insufferable snob, like his mother, and were that the case, he’d deserve any alienation and derision readers chose to direct his way.  Andy’s saving grace is that he uses his money as a means to serve and enrich the lives of others.  Does he live well? Yes.  Does he lord it over others, flaunt his wealth, or look down at other’s for their lack of resources?  No; he’s down in the trenches with Ed, Forrest and Paul, helping them build their own businesses.  Despite this, he was rather isolated as a child, resulting in some lack of social awareness.  This usually results in him missing the finer points of man-to-man flirting, and a complete ignorance of anything kinkier than mixing checks with plaids.

BN – One of the benefits of an online strip is the access to the achives of the entire series, for old and new readers alike. With over 500 strips published in a 11 years span, we can see the art growing and shifting from paper and pencil to digital. How did this process happen?

It came along very slowly, with me kicking and screaming the entire time.  You’ll notice it took me seven years to go from coloring by hand to using digial colors, and another year-and-a-half before I tried sketching directly onto a digital medium!  What makes this really pathetic is that I make my living as a mainframe batch scheduler; I work with computers for a living!

BN – Has the scripting process changed as well??

Not really.  The scripting is what drives the stories; if I can’t come up with a situation, and the dialog to go with it, I can’t begin drawing.  Further, I have to pare the script down to the fewest lines possible, as that determines how many panels I need to use.  Having to tell a story in six pictures or less really hones your editing skills…and having to be funny on top of it just adds to the challenge.

BN – Finally, the floor is all yours, Bruin. Anything else you’d like to comment on or share with us? And thank you SO much for the interview!!

Back in late 1999, a friend of mine suggested I develop and submit a Bear-themed comic strip to a fellow in Chicago who was hosting a Bear-themed website. “Bear With Me” launched the first weekend of 2000. When the host website changed its focus, I took BWM to its current, independent site. I honestly don’t know how many people access the site, much less have bookmarked it, but I’ve always been astounded by it’s reach; I’ve gotten fan mail from Australia, the Philippines, Great Brittan, Brazil, and Germany. The mail is almost always positive and sometime, in those cases where a person reveals that they found encouragement by finding something that was positive, relatable and affirming, it is deeply moving.

I know that BWM will always leave people wanting (“Why no Black characters, no Latinos?” “Why don’t you have one of the characters do….?”); I figure that’s just part of the game. A few have suggested showing the guys having sex, or showing them in the nude. Sorry, guys; it’s just not going to happen. I’m not that good an artist, and it simply isn’t a direction I want to go. BWM will remain PG-18.

I regard the “success” of “Bear With Me” (CAN BWM be considered “successful”? God knows I don’t make a penny off of it!) with surprise, gratitude and amazement. I would NEVER have thought that a no-talent scribbler like me would be interviewed for a website in BRAZIL!

I thank YOU for taking the time out of your day to chat with me.

You can catch up on Bear With Me on the strip’s oficial site, and coming September, back here at Bear Nerd in Portuguese. 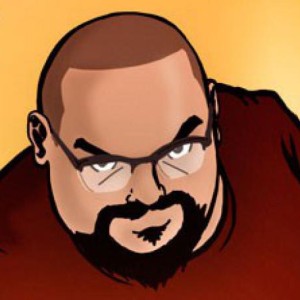